During a recent Google Webmaster Central hangout, in addition to fielding questions about keyword stuffing, emojis in page titles, mobile friendly tags and predictions regarding Twitter receiving preference in SERPs, when asked what’s up with these troublesome Google Desktop SERP fluctuations…

“I don’t know of anything specific there. We make changes all the time. “

When pushed for a more specific answer by Joshua Berg of REALSMO.com regarding significant algorithm changes, John responded (at approximately 50:27):

“We didn’t update anything. Not that I’m aware of at least. So I saw Barry’s blog post about some changes he was seeing on the weekend but that’s not related to Panda or Penguin. I mean we essentially make updates all the time so these are changes as normal.”

Baruch Labunski of Rank Secure pointed out that he saw a bigger effect than ever before and John responded:

“I guess it depends on how you look at that. What you measure, how your tools are measuring… it’s really hard for me to say what you’re seeing.”

If that answer frustrates you, scroll down the YouTube screen to the machine generated transcript for some stress-busting amusement. 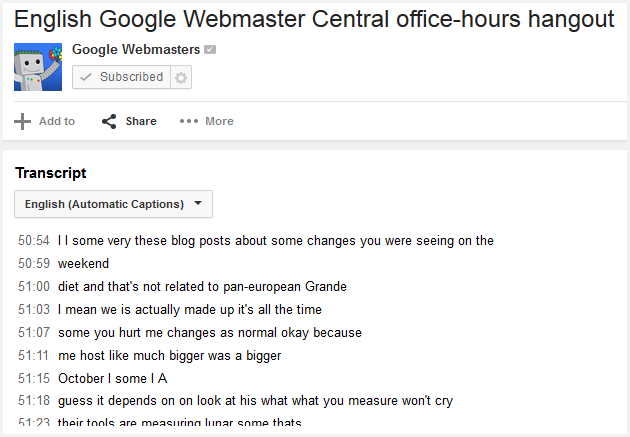 The good news is that whatever algorithm updates have been rolling out, the Google Mobile SERPs seem to have stabilized.

Spoiler Alert!  Twitter predictions? Nope. And Emojis in title tags are cool in appearance but are not a good practice because Google might (i.e., probably will) filter them from displaying in search engine results – so don’t invest your time adding them to a bunch of webpages.

She also enjoys working with Rank Ranger’s developers on ideas for new digital marketing reports and features that will make her job easier.