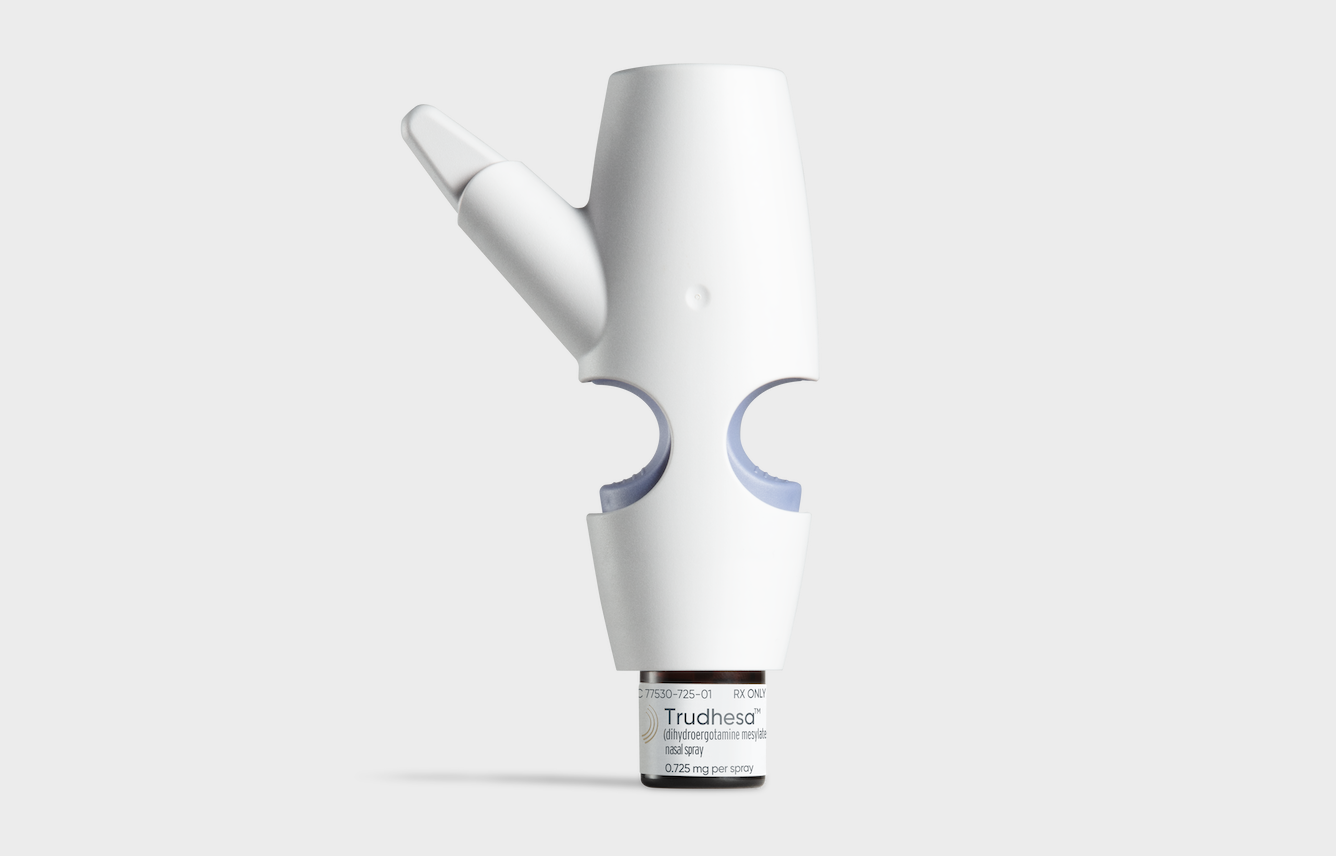 Impel expects to commercially launch Trudhesa in early October and it has begun to recruit a sales force to market it.

Approximately 31 million adults in the U.S. are living with migraine, according to the company, and many patients do not experience full relief with existing drugs.

“Pills don’t really work for a lot of patients so there’s a high unmet need,” Sheena Aurora, a neurologist and Impel’s vice president of medical affairs, told GeekWire in an interview this week.

The approval is the culmination of a vision that began more than ten years ago for John Hoekman, who co-founded the company in 2008 when he was a graduate student at the University of Washington studying medical devices.

“When I founded the company, I never really expected to get a product on the market to patients,” said Hoekman, who served as CEO until 2017 and is now chief technology and development officer.

Impel has bypassed the traditional path of handing its product off to a larger drug company for the final stages of clinical trials and commercialization.

It’s been a “big challenge to shift from a device technology-focused company to what is now a pretty integrated pharmaceutical company,” said Hoekman. The company is led by biotech vet Adrian Adams who took over over from Jon Congleton last year.

Impel raised $80 million in Washington state’s first IPO in April. Shares spiked overnight in after-hours trading Thursday to more than $33, and came back down Friday, trading at around $20/share.

As a graduate student Hoekman studied how to deliver drugs to the upper nasal cavity, which contains a rich bed of blood vessels. Agents can reach the blood and the brain more rapidly from the upper nose than through lower part of the nose through conventional nasal sprays.

Conventional nasal sprays “are OK if it’s a local rhinitis or an allergy type of thing where you’re only affecting the nasal cavity,” Hoekman told GeekWire. “But for something more, if you’re trying to get it into your bloodstream or into your brain it’s very inefficient.”

Hoekman’s graduate research ultimately led to Impel’s Precision Olfactory Delivery (POD) system, which delivers drugs deep into the upper nasal cavity using an external gas propellant. “All you have to do is put them in your nose, press a button, and the drug goes where it needs to go,” said Hoekman.

Trudhesa builds on a decades-old drug for migraines, Dihydroergotamine Mesylate (DHE). DHE is traditionally delivered via an injection and there are also oral formulations that act slowly through gut absorption and conventional spray formulations. Trudhesa delivers DHE via the POD directly to the upper nasal cavity.

The company recently published a phase 3 clinical study on 360 people with recurrent migraines. The study showed that Trudhesa was generally well tolerated with no serious side effects. In addition, about two-thirds of patients had self-reported pain relief within two hours of using the spray.

In a previous study, the company also showed that their system achieves higher blood concentrations than Migranal, a DHE formulation from Bausch Health that targets the lower nasal cavity. There are no studies, however, directly comparing Trudhesa’s ability to beat pain against Migranal or similar generic sprays.

Hoekman said that the company partnered with several pharma companies in its early years, “when we were very, very tiny and didn’t know what we were doing at all.” But those preclinical collaborations didn’t go so well.

“We got a quick lesson that if you’re relying on your partners — as great as they might be — to acquire you or to do a big license deal, if things go wrong or if they have a change in focus or something happens with the economy that can fall apart quickly,” he said.

“We decided that, regardless of anyone else’s interest or their desire to work with us, that we would try to develop this ourselves through approval,” added Hoekman. “We’ve always had the idea that you have to be able to control your own destiny.”

The approval bodes well for two other agents in Impel’s pipeline. The company will be initiating a phase 2 proof-of-concept study later this year on an agent for agitation in autism and expects data to emerge in 2022. The second program is for Parkinson’s disease.

Both programs leverage existing drugs but deliver them through Impel’s POD system for rapid action. “Clinically this opens a whole realm,” said Aurora, opening the door to future formations to more rapidly or conveniently get drugs to their target in the body.

“We’ve now assembled a team that is essentially a small pharmaceutical company that was able to pull [Trudhesa] through the process, and hopefully we’ll be able to do it again,” said Hoekman.

Prior to the IPO, Impel had raised $140 million from investors including KKR, Norwest Venture Partners, 5AM Ventures, Vivo Capital, and VenBio Partners.