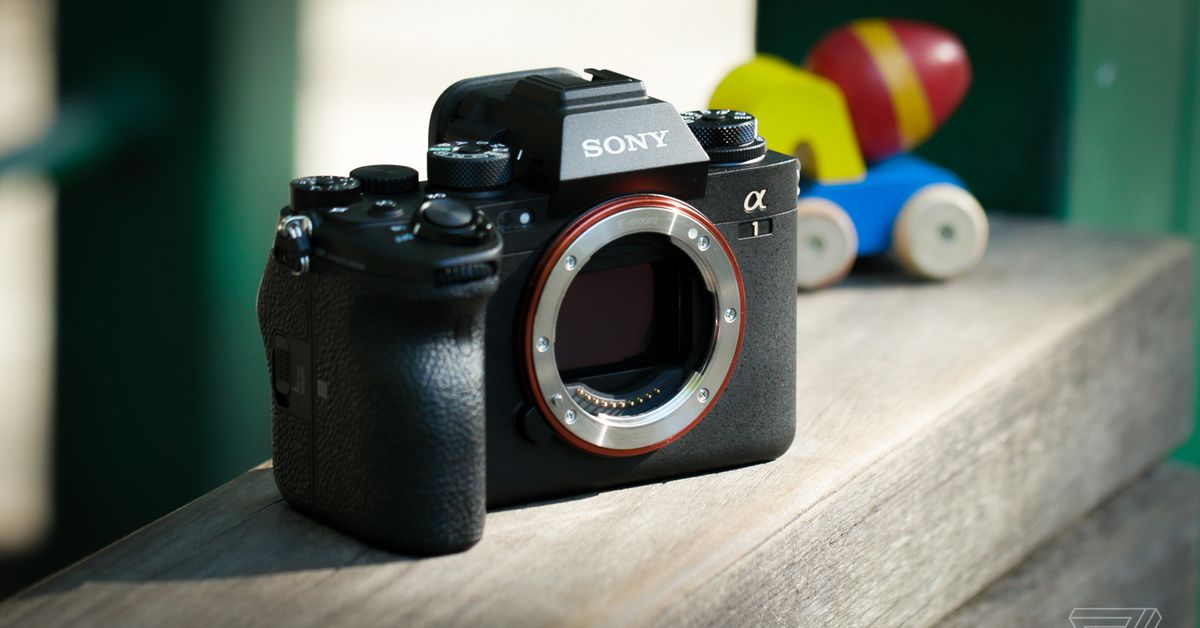 I was quite out of my element when kneeling in the middle of 42nd Street in New York City attempting to photograph Terry Barentsen, professional cyclist, YouTuber, and Twitch streamer. I have never shot a cyclist before, certainly no one as fast as Terry. But Sony’s new flagship camera, the $6,499 Alpha 1 (A1), made this task as easy as shooting the flowers growing outside of my stoop.

The Alpha 1 is comprised of a 50.1-megapixel stacked CMOS sensor, an OLED viewfinder capable of 240fps refresh rate, and a mechanical shutter flash sync up to 1/400th of a second, all in a body that doesn’t look or feel that much different than any other Sony full-frame mirrorless camera. It can shoot 8K video at up to 30fps, make 120 autofocus calculations every second, and shoot 50-megapixel images up 30 times per second, complete with autofocus and auto-exposure. There is very little the Alpha 1 can’t do. 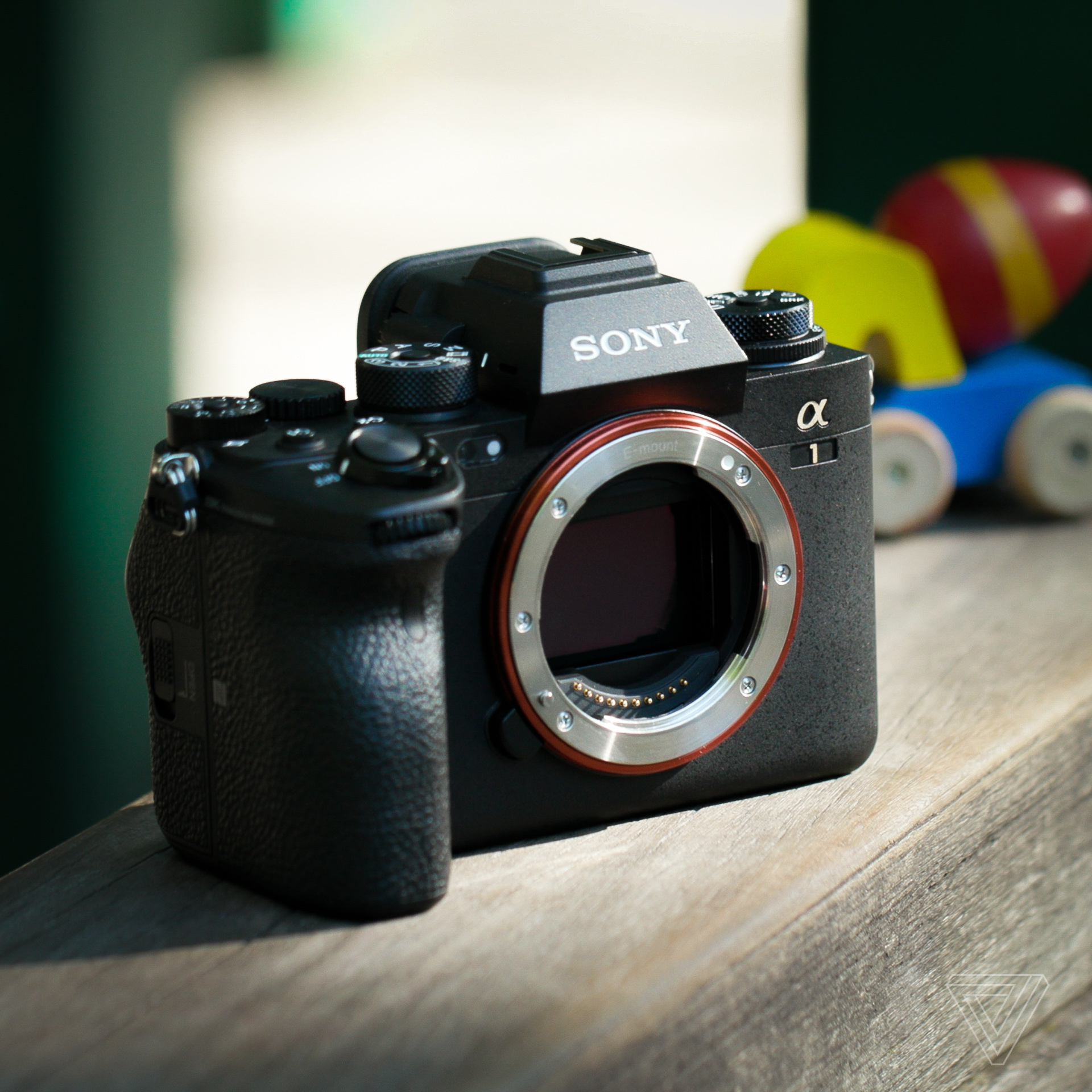 On paper, the Sony Alpha 1 is fast. But in practice, it somehow feels even faster. The standout capability to me is the 30fps burst mode. In order to reach those lofty capture speeds, you have to have your camera above 1/250 shutter speed, use the electronic shutter mode, and only shoot in either RAW compressed or JPEG format.

This burst mode also performs best when paired with Sony’s latest lenses that can very quickly move the focusing element within the lens. To test this, I had Terry ride very quickly down busy midtown Manhattan streets. I shot Terry with the 100-400mm Sony G Master lens, which has the latest and greatest linear XD focusing motors in it.

The Alpha 1’s high-speed autofocus system had no problem finding Terry over 200 feet away and keeping him in focus despite my shaky hands, the moving traffic, and Terry’s fast pace. It almost felt like cheating when my only job was to stomp down on the shutter and keep my subject in frame.

There were very few out-of-focus shots, even when Terry was advancing straight at the camera, and I was able to grab well over a hundred photos before buffering got in the way. And because the OLED EVF can refresh up to 240 times each second, my view was never interrupted or lagged. A white box comes up on the screen every time an image is captured in lieu of the sound or screen blackout of a shutter.

The 50.1-megapixel images from the A1 are sharp, full of contrast, and true to life. There’s so much resolution to work with that I wish I had shot wider and cropped in after the fact — there’s really very little loss of quality. Even better is the dynamic range I still had with the compressed RAW files. Sony claims the A1 has 15 stops of dynamic range, and when attempting to bring a shadowed figure back, I was able to do so with ease.

Photos in low light manage to hold on to the deep blacks while not making the image overly grainy. These deep blacks provide a lot less dynamic range in post, but I was able to shoot at 10,000ISO before noticing too much grain in the shadows.

Video on the Alpha 1 tops out at the very impressive 8K 30fps at 10-bit 4:2:0 H.265. And while Canon’s R5 beat the Alpha 1 to that spec, the Sony does a better job shooting it, simply because it doesn’t overheat as easily. While the camera got warm to the touch, especially during these recent very hot days in NYC, it never stopped recording due to overheating when the heat allowance setting was set to high. Gerald Undone did loads of testing on long run 8K video, and in short, this camera doesn’t have the overheating problems of the Canon R5. Instead, it has quick recovery times, no record limits, and with a dummy battery connected to a power source, it can run for many hours straight.

Video can be recorded in the very flat, malleable S-log setting as well as Sony’s S-Cinetone profile for a cinematic look right out of the camera. This profile is limited compared to shooting in log, but overall, it is great for people who are just getting started in video and who are intimidated by scopes, LUTs, and want some color grading training wheels. And it’s even better for the lazy among us who don’t feel like coloring footage.

Sony has also made some improvements to the rolling shutter problem of its older mirrorless cameras. Cars no longer appear as if they are made of jello, though at high speeds, I did still see this unwanted effect on trains. Sony has also added a variable shutter option for fine-tuning your shutter speed to avoid flickering lights (or in my case, flickering phone screens).

Finally, flash photography fans will be very happy with the mechanical shutter’s ability to sync with flashes up to 1/400th of a second. I am not a big user of flash, but this is a big deal since 1/250th of a second has been the industry standard for a while, and this is two-thirds of a stop faster than that.

Other reviewers have pointed out EVF blackout problems with the A1 since its launch, and it’s something I observed in my testing as well. When attempting to use the EVF in bright sunlight, the camera will sometimes fail to switch from the monitor to the viewfinder, and all screens will go black instead. In my 14 days of use, the A1’s EVF failed to activate in bright sunlight once. I then had to power down the camera and turn it on again to get a view back. For a camera marketed toward speed and with a price tag this high, a slowdown like that is unacceptable.

Physically, the Alpha 1 is nothing new, and if you have experience with any of Sony’s Alpha cameras, the A1 will feel very familiar. It’s compact, lightweight, feels great in my hands, and gives me enough physical buttons and dials to lessen the need for jumping into the menu, which, although better than it used to be, is still a labyrinthine behemoth that takes a great deal of getting used to.

The A1 also uses the same Sony NP-FZ100 batteries as other more recent Alpha cameras. It is definitely pulling more power than most other models, though, and one battery only lasts for about half a day of heavy photography use with the A1, compared to the full day or more I might get with a less capable model. With a larger sensor, more robust EVF, and ridiculously fast burst mode, that battery usage checks out though. I highly recommend using the A1 with an extended battery grip or having additional batteries on hand.

Since this is Sony’s top-end model targeted at professionals, there is a plethora of ports on the left side of the camera, including an ethernet port and full-sized HDMI. All are covered by solid-feeling plastic doors that close with a reassuring click. On the right are dual SD card slots that both support either SD or CF Express Type A cards. Sony seems intent on making CF Express Type A A Thing, but using Type B would have given shooters more options in price and brands, not to mention Type B cards are twice as fast.

I was also disappointed by the articulating screen that does not flip out 180 degrees. A fully articulating screen is great for vlogging and is also very helpful for tight angles or setting up self-portraiture. Instead, I used Sony’s “Imaging Edge Mobile” app for filming myself. While basic in design, it works well enough for remote shooting and image transfer. It would be great to not have to re-pair the app to the camera every time I quit it, though.

At $6,500, the Alpha 1 is a professional tool with a professional price tag. That is certainly not cheap, especially compared to the equally professional Canon R5, which sits comfortably under $4,000.

But the A1 earns its price tag with its massive sensor, high-spec video, all of the dials and buttons one could need, an outstanding AF system, and fast burst modes. It can work across many disciplines with all of these features — from professional video work to studio, strobe work, and even action photography. It’s like Sony took all of the best features of the A9 Mark II, the A7S Mark III, the A7R Mark IV, added the ability to shoot 8K video, and then put it all into a single camera.

For pros in the Sony system looking for the ultimate single-body tool, this is it. The rest of us might choose to buy a few extra lenses and go with a more inexpensive camera in the lineup, depending on our needs.

Still, I’ll be wishing I had the Alpha 1 in my hands the next time an opportunity to shoot a professional cyclist comes around.

Photography by Becca Farsace / The Verge